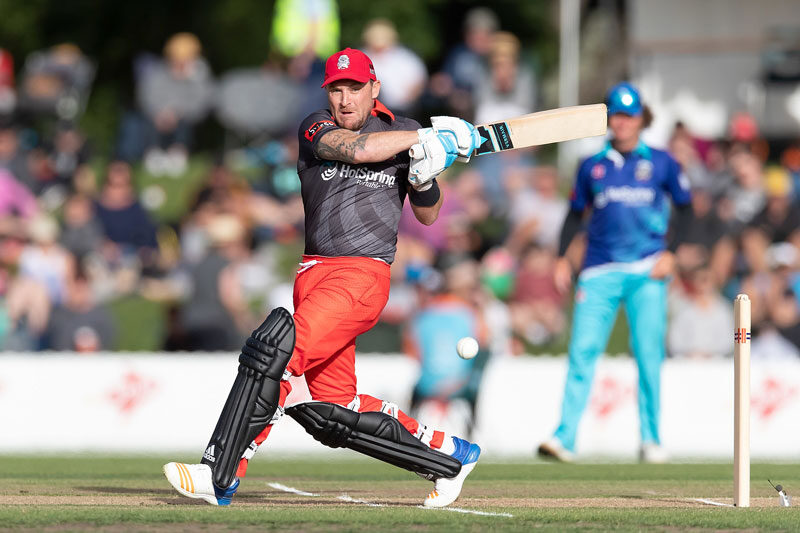 The floodlights will be blazing at Ōtautahi Christchurch’s Hagley Oval when the third annual Hot Spring Spas T20 Christchurch Black Clash in association with Heartland switches to a day-night format for the first time on Friday, January 22.

Once again, a galaxy of cricket and rugby stars will assemble for a cross code classic that has already become firmly established as a highlight of the Kiwi sporting summer.

And this time the event will carve out another slice of history as the first premier sports event to be played under the brand new floodlights at Christchurch’s stunning Hagley Oval.

“Hagley was already one of the finest cricket grounds in New Zealand and the addition of lights will take it to a whole new level,” Team Cricket captain Stephen Fleming said.

“The first Black Clash here in Christchurch was an incredible event – apart from the result, obviously. And this one promises to be even better.”

The inaugural Hot Spring Spas T20 Christchurch Black Clash in association with Heartland was played in front of a capacity crowd at Hagley Oval and watched by over one million Kiwis at home on television.

Having put the rugby boys firmly back in their place earlier this year in Napier, a Team Cricket side that will be spearheaded by former Black Caps captain Dan Vettori, world cup hero Grant Elliott and ‘Two Metre’ Peter Fulton will be supremely confident of posting another win.

“It was pretty obvious that the 2019 result was just one of those freak occurrences that happen in sport,” Fleming said.

“There’s no rational explanation as to how it happened – and there’s certainly no way anyone can foresee it happening again.

“We’ve got a lot of respect for Sir Graham’s team – as rugby players. But as cricketers… not so much.”

Former teenage tearaway Dagg famously broke Fleming’s toe with a brutal yorker in the opening match and followed that up by ripping out Fleming’s former One Day International opening partner Nathan Astle in Napier.

“Flem still talks a darn good game – but he hasn’t exactly troubled the scorers in these matches,” Sir Graham quipped.

“Perhaps it’s time for him to follow my lead and become a non-playing coach?”

Sir Graham, who arrived for today’s press event in a helicopter piloted by his former captain McCaw, said he has bolstered his coaching staff by luring defector Scott Robertson back from Team Cricket.

“Scotty wins everything he touches,” Sir Graham said. “The one exception was when he bizarrely joined Team Cricket for the first Black Clash. I’m sure he will have learned his lesson there.”

David Higgins, founder and director of Duco Events, said it was fantastic to be able to look forward to staging another incredible event following the impacts of Covid-19 on the event industry.

“It has been a bloody tough time for the events industry, there’s no doubt about that,” Higgins said.

“But we are extremely fortunate in this country that we have been able to keep the pandemic largely under control, which means we can look forward to some great events this summer.

“We’ve already seen with the crowds that flocked to Super Rugby that Kiwis are desperate to get back to attending sports events – so I’m positive we’ll have another sell out under lights in Christchurch.”

With international travel restrictions likely to still be in place, the match was a perfect chance for Kiwis from around the country to head south and check out everything Canterbury had to offer, Loren Heaphy, General Manager – Destination & Attraction, ChristchurchNZ said.

“Events play a key role in our city’s economic recovery and we are excited to welcome Black Clash back to Hagley Oval. The third instalment of this event will be a popular feature in our summer events calendar and provide a significant boost to our tourism and hospitality sectors at this much needed time.

We feel lucky that New Zealand is still able to realistically plan large-scale public events like this, and I encourage Kiwis to make the most of our position and get out to celebrate, and perhaps even add on a long weekend to explore our city and region.“