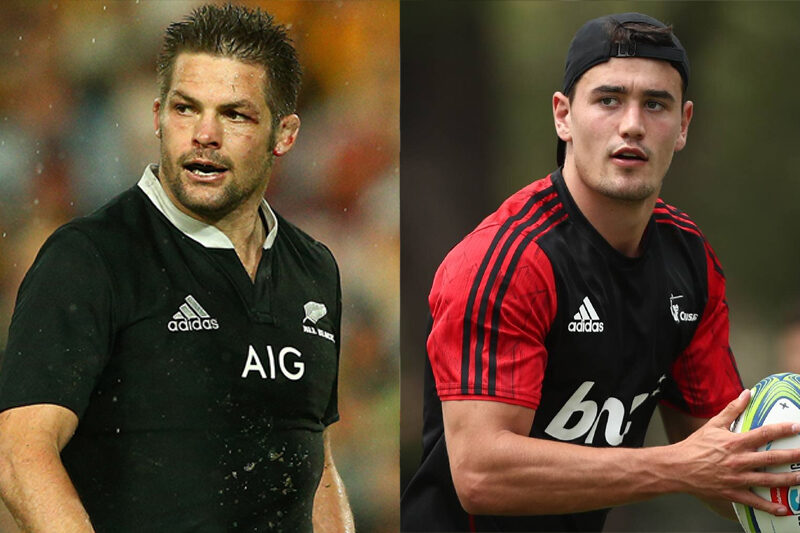 Legends Richie McCaw and Craig McMillan represent the old guard while in form Crusaders and All Blacks back Will Jordan brings some youthful spice to the trio of Canterbury sporting heroes to sign on for the Hot Springs Spas T20 Christchurch Black Clash in association with Heartland at Hagley Oval on January 22.

McCaw, who produced the moment of the inaugural showdown between the summer and winter codes when he pouched a steepling outfield catch to remove Team Cricket’s supremo Stephen Fleming in 2019, has once again answered the call to arms issued by Team Rugby coach Sir Graham Henry.

And the 2011 world cup winning strategist appears to have nailed another recruitment masterstroke by securing the services of Jordan – the recently capped All Black back who tore up Super Rugby Aotearoa this season – but whose boyhood dreams were focussed primarily on cricket.

Describing himself as “more of a cricketer than a rugby player” at school, the former Christchurch Boys High student represented Canterbury as a batsman at U17 level.

“I took cricket more seriously until Year 13, when I started playing full-back and got interest from the Crusaders Academy,” Jordan said earlier this year.

Jordan admitted he will be feeling a bit of pressure returning to the cricket pitch after concentrating solely on rugby since joining the code’s professional ranks.

Fittingly, Jordan’s sporting idol is none other than Israel Dagg, the tearaway schoolboy fast bowler turned All Black who has starred in the first two editions of the Hot Spring Spas T20 Black Clash.

Dagg, who famously broke Fleming’s toe with a Yorker in the first match at Hagley Oval in 2019, will once again spearhead Team Rugby’s pace bowling attack alongside former Central Districts prospect Jordie Barrett.

With Fleming stacking his line-up with former Black Caps power hitters, Team Rugby’s bowlers will certainly have their work cut out for them.

And the challenge has only got tougher with the addition of McMillan, the pugnacious middle order batsman and long-serving former New Zealand batting coach.

“That’s a classic case of too many chiefs and not enough Indians if you ask me,” Sir Graham noted.

“Although the way Flem has played the in-swinging Yorker in the last two matches, I’m not surprised he’s stacked his team with batting coaches. I’m pretty sure he has more broken toes than runs scored so far.”

However, with Nathan McCullum also confirming that he will form a spin bowling duo with Daniel Vettori, Fleming’s line-up does have an ominous look about it.

“Fair play to Team Rugby, they bowled very well to restrict our total in Napier last summer,” Fleming said. “But unsurprisingly they were pretty clueless with the bat against Dan and Nathan and I can’t see that changing.

“And with this game being the first major game played under lights, it’s going to be an entirely different experience for a bunch of rugby players who’ve played most of their cricket at Sunday afternoon barbecues.

“I can tell you that we cricketers are absolutely stoked to be the first players to have a chance to perform under lights at Hagley. It’s going to be incredible.”

Freshly returned from a coaching stint in the IPL with the Chenai Super Kings, Fleming said he was now focussed on adding some youth to his vastly experienced Team Cricket side.

“I’m not surprised to hear that,” Henry quipped. “There is a bit of ‘Dad’s Army’ look to that Team Cricket side. Although with big Jacob Oram back and Two Metre Peter Fulton coming in, they have got a bit of size to them. I’ll give them that.”

With the superstar-stacked line-ups taking shape, the match is sure to be another smash hit with Kiwi sports fans. A crowd of 8,500 is expected at Hagley Oval, while the broadcast of the match free-to-air on TVNZ will provide captivating viewing for those unable to attend.

The one million-plus cumulative viewers in 2019 and 900,000-plus who tuned in earlier this year represented the highest watched cricket events on NZ television in over a decade – including the 2019 world cup final.

Andy Lee’s winning catch from the last ball of the match produced 160,000 video streams with 200k unique browsers on TVNZ in a single day.

The 2021 event will be played under lights for the first time, with the evening timeslot expected to generate an even larger TV audience.

Following on from the Prada Cup and TVNZ News, the Hot Spring Spas T20 Christchurch Black Clash in association with Heartland will be on-air from 6.30pm.

The line-ups so far: